Anna Barthos and me, Amandine Koch, did a survey about the top favourite sports at our school. After some pretty weird experiences with students, offering us money if we’d manipulate the results, we found our expectations more or less fulfilled: Number three was soccer, number two skiing – our typical sport – and number one, the big surprise, dance. Not a that big surprise, that it was voted by only girls though. Some stereotypes seem to be true at our school!
Publicado por Bundesgymnasium Dornbirn en 3:45 No hay comentarios:

Laure Manaudou is a french swimmer, she born 9 October 1986 in Villeurbanne. Between 2004 and 2007, she won 1 gold medal at the olympic games of Athènes on the 400meters, 2 mondials titles on the same distance in 2005 and 2007 and 1 on the 200meters in 2007. On this period, Laure Manaudou won 3 Olympics medals, 6 mondials medals and 13 europeans medals, his trainer was Phillipe Lucas, and when she stopped to train with him, she stopped too to win titles. After the Olympics games of Pekin where she losted in every competitions she did (2008).On 17 September 2009, at 22 years of age, Manaudou announced through the newspaper Le Parisien her retirement from competitive swimming.
She was quoted as saying, "It came to me little by little. I didn’t make it on impulse. It has matured slowly.” She made her return to competition on July 14, 2011 in Tigers colours at a small swimming meet in Athens, Georgia in the United States, where she set a personal record in the 50 m freestyle event (25.84 s).
Manaudou competed in the 2012 Summer Olympics in three events - 100 m backstroke, 200 m backstroke, and the 4 x 100 m medley relay but she failed. However, she was poolside on August 3 as her younger brother Florent won a surprise victory in the men's 50 m freestyle final, and embraced him for his victory. She stopped his career after these Olympics Games. We recently saw her on a french Show called : "Splash!". It was a competition with french stars. It was a competition where the stars add to train for do the best dive every weeks, Laure Manaudou was one of the judge. Laure is married with an other world class french swimmer, Frédérick Bousquet, they got a child : Manon.
Publicado por Espace Scolaire Condorcet en 0:51 No hay comentarios:

You need Flash player to view this video
Longue paume is a sport which is typical in Picardie This sport is played by two teams of six players There are six sets ( sometimes seven in case of deuce ) . Longue is similar to tennis because the objective is the same. Longue paume is an ancestor of modern lawn tennis
Publicado por Espace Scolaire Condorcet en 7:27 No hay comentarios:


is a team sport with two teams of five players each. The aim of the game is to score points by throwing the ball into the opponent's basket. The game is played on a rectangular floor called the court which has dimensions 28x15 in national competitions and 29x 15 m in the NBA. In the middle of the both back sidelines of the court there are special boards with baskets (diameter 45cm) hung 305 cm above the floor. The ball is moved down the court toward the basket by passing or dribbling. The team with the ball is called the offense. The team without the ball is called the defense. When a team makes a basket, they score two points and the ball goes to the other team. If a basket, or field goal, is made outside of the three-point arc, then that basket is worth three points. A free throw is worth one point. The game is divided into four quarters, each of which consists of 10 minutes in international matches. During the break between the first and second and the third and the fourth quarters takes place a 2-minute break. There is a gap of 15 minutes between halves. The time is stopped at every suspension of the play. There are 7 reserve players in every team. A player standing in the place can hold the ball for 5 seconds when he is attacked by the opposing team. He has got 24 seconds to throw a ball to the basket. After each throw the game is begun by the team that lost points.

Struggling in the Polish Basketball League takes place on a regular basis (the first season 1947/1948) the round system (from the season 1984/1985 with the play-off phase), as the national championships and is designed for the best Polish basketball clubs. The best in the Polish leaque is also the champion of Poland. The Polish League is a professional league, since October 2001 has been a member of the European Union Basketball Leagues (Euroleague). Only the clubs with professional status are admitted to play in the Euroleague - after meeting all the necessary criteria - received a one-year license to perform at this level. is one of a motorcycle sport where riders compete over four anti-clockwise laps of an oval circuit. Speedway motorcycles use only one gear and have no brakes and racing takes place on a flat oval track usually consisting of dirt or loosely packed shale. Competitors use this surface to slide their machines sideways, powersliding or broadsiding into the bends. On the straight sections of the track the motorcycles reach speeds of up 110 km/h. The sport is popular mainly in Europe: Great Britain, Denmark, Sweden and Poland.
The history of speedway: There is evidence to show that the first meetings were held on small dirt tracks in Australia on 15 December 1923 at West Maitland Showground. The idea came to Europe in the second half of the 20th century. The first competition took place on the Manchester’s tracks on 25 June 1927. For the beginning of speedway in Europe it is often considered a competition held in High Beach on19 February1929, which was attended by over 30,000 spectators. In the same year they inaugurated the first in the world regular speedway league, today known as British Elite League.

In Poland: The Polish name żużel derives from the days when black cinder surfaces were used on the tracks, now replaced by a special mixture of syenite and granite. The first games were played in Poland since the early 30s of the 20 century. Unmodified road machines of different capacity engines were used. The competitions played on 7 August 1932 in Mysłowice are considered to be the first individual Polish championships. The regular speedway league was organized in Poland in 1948. Then specifically designed motorcycles began to appear in Poland.

In Poland the Main Committee of Speedway is responsible for the speedway competitions. The Polish League Championships are considered to be one of the three most powerful speedway sports leagues in the World (along with the British and Swedish), and the strongest financially - Polish speedway clubs offer players the highest wages in the world. Since 1990 in the Polish league the foreigners have regularly started, including the world top riders competing in Grand Prix. The first contract was signed in by a four-time world champion Hans Nielsen from Denmark. 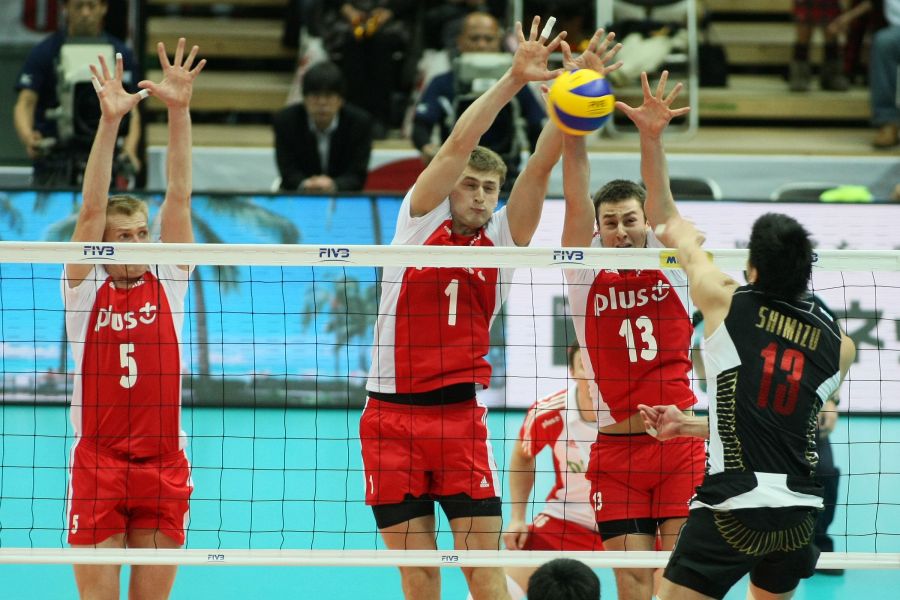 Volleyball is a team sport in which two teams of six players are separated by a net. Each team tries to score points by grounding a ball on the other team's court under organized rules. Generally, the different positions on a team are passer, digger, spiker, blocker, server, and setter. Some players have multiple roles. For example, a libero will likely be responsible for passing and digging. A middle hitter (spiker) could focus on spiking and blocking. The complete rules are extensive. But simply, play proceeds as follows: a player on one of the teams begins a 'rally' by serving the ball (tossing or releasing it and then hitting it with a hand or arm), from behind the back boundary line of the court, over the net, and into the receiving team's court. The receiving team must not let the ball be grounded within their court. The team may touch the ball up to 3 times but individual players may not touch the ball twice consecutively. Typically, the first two touches are used to set up for an attack, an attempt to direct the ball back over the net in such a way that the serving team is unable to prevent it from being grounded in their court. The creator of the game was William G. Morgan, an American physical education teacher in Holyoke, Massachusetts. On February 9, 1895 the show of this discipline was held in the local gym, which was then called Mintonette. On April 18-20, 1947 in Paris The International Volleyball Federation (FIVB) was established. In 1949 the first World Championship and in 1952 the first Women’s championship took place. The Men's European Championship has been held since 1948 and the Women’s championship since 1949. For the Olympic Games volleyball came in 1964, during the Summer Olympics in Tokyo.


In Poland: The first match took place in Warsaw in 1919. A year later in Łódź the tournament was played between the school teams. At first volleyball was trained mainly at schools. The game wore a lot of names for example flying ball. The first volleyball section came into existence at the junior secondary school in Warsaw. Since 1923 the first volleyball clubs have been formed. In Warsaw there were the following clubs : Eagle Warsaw, Orkan, the 13 Scout Team. The organizational matters were settled, leading to the creation of national games. The key date for Polish volleyball is the year 1928. Then, Warsaw and Łódź held the championship of their cities. The Polish Volleyball Federation as an independent sports federation was founded on June 30, 1957.

One of the activities within the Comenius Project is to give the participants from other countries information about Spanish and Murcian sportspeople who are most admired by you. In order to find out that information, we are going to make a survey.
Put them in order according to your preferences:

Thanks for your participation.

After counting the votes, the following sportspeople have been selected:

Our students have done some research about their lives and sports careers, let´s have a look at what they have found so that we can know them better.

Another activity for the Comenius Project is to choose the three sports you like best.
So we are going to make another survey.